Bangladeshi-British businessman Kazi Shafiqur Rahman calls himself the Halal version of Richard Branson. The 32-year-old says he has always dreamed of following in the footsteps of the Virgin boss and launch his own airline – and he’s spotted a gap in the market. Jeremy Corbyn swamped by fans as he nips to the loo at Labour Live He first dreamt up the idea of a sharia compliant airline while working to clean toilets at London’s City Airport. Now he is on the brink of launching Firnas Airways, compliant with the teachings of Islam, with modest dress for cabin crew, Halal food, and strictly no alcohol on board. He admits the sharia angle was originally a marketing ploy, aimed at getting people to take notice – and it worked. But it also means something to Kazi, himself a Muslim who has experienced stigma when travelling. ‘Controversy sells. And as soon as you mention the word Muslim. everyone wants to hear,’ he says in documentary How to Start an Airline tonight on Channel 4. ‘All Muslims are loving it. But on the other hand you have the Islamophobic people. ‘When it comes to the hateful comments, it makes you think, hang on. It makes you think about everything, about the whole approach.’ He added:’I am a British citizen but whenever you pass through security you feel like you have done something wrong.’ Kazi Shafiqur Rahman with his jet Testing out the driving seat The entrepreneur hopes to see Firnas Airways eventually fly long haul to the Middle East but to start with the airline, which is leasing a 19 seater Jetstream 32 plane at a cost of £8,500 a month, will fly short haul commuter routes between UK cities.

His path to the skies hasn’t been easy – as the documentary highlights. Kazi arrived in the UK with his family when he was 15 and he couldn’t speak a word of English. Growing up in east London, he wasn’t fussed about school, leaving with just one GCSE and working a number of low pay jobs that he hated until he came across the vacancy at City Airport. He did every job there imaginable, from catering to security to cleaning plane toilets but in 2008, he was made redundant when the credit crunch hit. He gets to grips with the food and drink cart  It may have been a blessing in disguise, as he set up a perfume business Sunnamusk with just £600 in his pocket, and now has five retail outlets across the country. But planes was where his passion lay, telling the programme: ‘When I see a plane I get all excited. It makes me happy. ‘I realised my passion when I saw a plane for the first time in my life.’ He says Firnas Airways – which takes its name from Abbas Ibn Firnas, a Muslim inventor from Spain who successfully attempted the first human flight in 875AD – is now just months away from operating its first commercial flights. 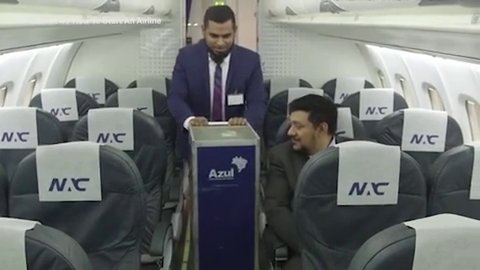